How to Reduce Basis Risk by Hedging with Options - Part II

A few weeks ago, in a post titled How to Reduce Basis Risk by Hedging with Options - Part I, we looked at how a large fuel consumer, such as an airline, can utilize options to mitigate their exposure to basis risk.  Similarly, energy producers can also reduce their basis risk by hedging with options.

Let's assume that the oil company has determined that the liquid index which is most highly correlated to the price at which is sells its crude oil is NYMEX WTI crude oil.  Let's further assume that the airline is looking at hedging their April 2013 - March 2014 crude oil production with either NYMEX WTI calendar swaps or average price (also known as Asian) put options.  Based on current market prices, the company has decided to hedge their oil production with either a $93/BBL WTI calendar swap or a WTI average price put option with a strike price of $93/BBL. 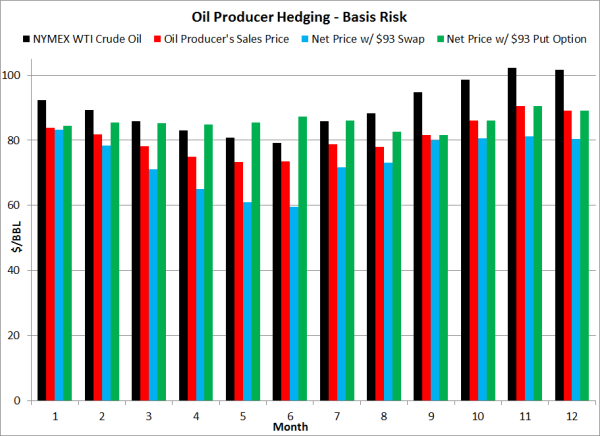 As you can see from the chart above, both the $93 swap and $93 put option provide the producer with a decent hedge when both WTI Brent and the price at which the oil company sells their oil are both decreasing, despite the basis.  However, when both WTI and the oil company's sales prices both begin to increase, as is the case beginning in month seven of the chart, the swap exposes the oil company to significantly more basis risk than the put option.  This is because a swap puts the oil company "at risk" to losses when WTI prices increase above $93, so long as the basis isn't static, which it is not.  It's import to note that basis relationships are rarely static as regional prices (i.e. the price as which the oil company sells their oil) are largely driven by regional supply and demand, while global prices (i.e. Brent and WTI) are largely driven by macroeconomics, geopolitics, etc.  Last but not least, the put option not only allows the oil company to mitigate their basis risk but it also allows them to benefit when oil prices as a whole (i.e. WTI) increase, which isn't the case with the swap.

There's no question that hedging with options can be costly.  However, in addition to providing companies with the ability to benefit from advantageous prices moves, hedging with options can also help companies mitigate their exposure to basis risk.  While this example focused on a Latin American oil producer, the same methodology can be applied to energy producers across the globe who do not have the ability to mitigate their basis exposure via their marketing or supply agreements and/or derivatives which are highly correlated to prices in their region(s).

This post is the second in a series on hedging energy basis risk with options. This first post can be accessed via the following link:

For more information regarding basis risk and basis hedging see the following posts:

The Top Twelve: Items to Consider During the ETRM System Selection Process