How to Reduce Basis Risk by Hedging with Options - Part I

As readers of our blog are well aware, we spend a lot of time analyzing and discussing basis relationships and the accompanying risk. While it's nearly impossible for most companies to completely eliminate their exposure to basis risk, there are numerous ways to mitigate it.

The simplest way to mitigate your exposure to basis risk is to enter into supply (in the case of a consumer) or marketing (in the case of a producer) agreements that reference a "primary" index (i.e. NYMEX natural gas furtures, ICE Brent crude oil, etc) or one of the numerous, liquid (actively traded) regional indices (i.e. Platts' Rotterdam 3.5% Fuel Oil, Platts Singapore jet kerosene, etc).

While the previously mentioned approaches to mitigating basis risk are quite common, one approach which we don't see used often enough involves hedging with options.  As an example, let's consider the case of an African airline.  Given that there aren't any liquid derivative markets for jet fuel or crude oil in Africa, African airlines generally have to hedge with one of the liquid indices in another region such as Rotterdam or Singapore jet fuel or Brent crude oil.  Clearly this isn't ideal but it can certainly be more advantageous than not hedging at all.

When a company is faced with hedging with an instrument which doesn't reflect the spot price in their local or regional market, basis risk is ever more present, as in the case of African airlines.  However, as we will explain shortly, there are hedging strategies available which can greatly reduce a company's exposure to basis risk.

Getting back to the African airline, let's assume that the airline has determined that the liquid index which is most highly correlated to it's own jet fuel costs is ICE Brent crude oil.  Let's further assume that the airline is looking at hedging their jet fuel exposure for the next twelve months with either fixed price swaps or call options on ICE Brent crude oil.  Lastly, let's assume that they airline is considering either a $105/BBL swap or a call option with a strike price of $105/BBL. 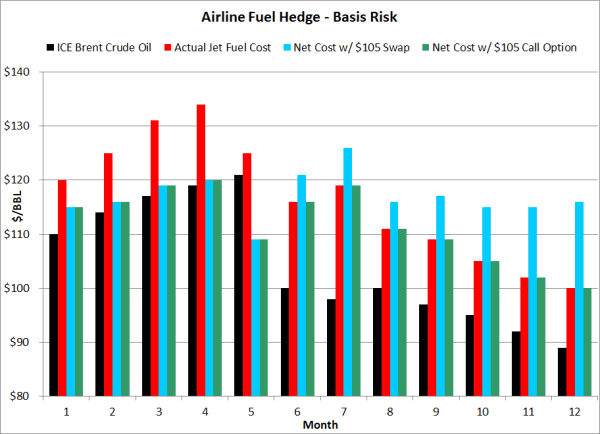 As the chart above indicates, both the $105 swap and $105 call option perform pretty well when both Brent and the airline's actual fuel costs are increasing, despite the basis.  However when both Brent and the airline's fuel costs are declining, as is the case beginning in month five of the chart, the swap exposes the airline to significantly more basis exposure than the call option.  This is because a swap puts the airline "at risk" when prices decline below $95, which isn't the case with the call option.  It's also import to note than if the price of Brent declines while the airlines fuel cost increases, as in the case of month seven, the basis exposure is ever more present.

While it can't be debated that the cost of hedging with options can be significant, the case of the African airline shows how hedging with options, as opposed to fixed price instruments, can help companies mitigate their exposure to basis risk.  In a future post we'll explore this concept further with several additional examples as well as how hedging with costless collars often presents "hidden" basis risk, a scenario which all too often leads to unexpected hedging losses.

This post is the first in a series on hedging energy basis risk with options. This second post in the series can be accessed via the following link:

How to Reduce Basis Risk by Hedging with Options - Part II

For more information regarding basis risk and basis hedging see the following posts:

The Top Twelve: Items to Consider During the ETRM System Selection Process