Natural gas basis rarely receives the attention it deserves, but can make or break a commercial hedging, marketing or supply strategy. In West Texas, for example, natural gas prices in the basin have been negative in recent months, turning a commercial product into a cost of production. Natural gas prices across the country are more volatile than the Henry Hub (HH) contract can capture. While the Henry Hub benchmark can reflect the broader trends in supply/demand, as well as major seasonal adjustments, few companies can actually price their gas against this benchmark. Below is a summary of how a selection of basis points has traded over the last year, represented as a percentage of the Henry Hub:

It doesn’t seem to matter where in the country your operations are located, basis prices fluctuate wildly. They’ve recently been so volatile in the Pacific Northwest (Sumas) that we excluded the highest numbers from the graph so the other points could be seen. The table includes the max, min, median, and mean of all daily numbers for the last year. You can see how neglecting your basis risk can result in a very undesirable outcome.

In a recent post, Unique Natural Gas Deal Provides "Ideal" Hedge for Both Buyer & Seller, we explored a strategy Apache recently utilized to mitigate. They signed a deal with Cheniere that indexes a substantial amount of their production to Cheniere’s LNG price, effectively translating their domestic US natural gas price risk into global LNG price risk. You don’t have to be a major natural gas producer to hedge basis risk, though. Basis swaps are the more common tools for hedging basis risk. In fact, before Apache signed their agreement with Cheniere, they had hedged 220,000 MMBtu per day of Waha basis risk with swaps. For the months April-June 2019, they had 180,000 MMBtu of basis swaps that locked their differential to Henry Hub at a discount of $0.53/MMBtu and another 40,000 MMBtu that locked their differential at a discount of $0.45/MMBtu, for a weighted average basis hedge of about $0.515.

In the case of both producer and consumer, the hedger receives a fixed price for the natural gas they sell or purchase. The counterparty accepts the risk of the floating price. With a basis swap, the underlying is the differential between the basis point and Henry Hub. That’s the major difference. For Apache’s Waha swaps, the gains/losses are determined by the relative value of Waha to Henry Hub. If Waha traded at a discount of more than $0.515, Apache’s hedges would show gains. If it traded at a discount of less than $0.515, the hedges would show losses. Either way, Apache’s Waha basis for that 220,000 MMBtu/day of natural gas would be locked in at $0.515 discount to Henry Hub. 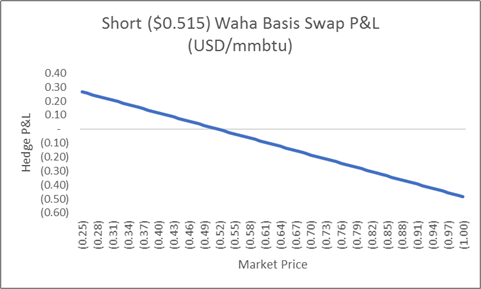 As the chart above indicates, by hedging with a basis swap, Apache is locking in a fixed price (differential) relative to Henry Hub.

Based on the data Apache makes available to the public, it seems pretty clear they prefer hedging their Waha basis risk rather than letting it float with the market. From a risk management standpoint, it better aligns Apache’s commercial operations with the risk they are taking in their pursuit of return on investment. Natural gas producers and consumers across the globe should be aware of their basis risk and take similar steps to mitigate the potentially adverse impacts it can have on your bottom line.