Cheniere Energy, Inc. and Apache Corporation recently committed to a long-term gas supply agreement that made headlines because of how the natural gas is priced. Cheniere has promised to pay Apache based on the price of its LNG sales, instead of using the domestic benchmark price for natural gas, Henry Hub. Can we view this agreement through the lens of a risk management strategy to judge it on its merits as a hedge? To do this, let’s look at what Cheniere and Apache advertise as their strategies and see how the concept of the supply agreement lines up against each.

Cheniere calls itself a producer of liquefied natural gas. It has a portfolio of liquefaction terminals, storage, and pipelines. Additionally, Cheniere employs a team of marketers tasked with selling the LNG from these assets. According to its investor relations site, “Its primary business objectives are to generate stable cash flows sufficient to pay the initial quarterly distribution to unit holders and, over time, to increase quarterly cash distributions.” We will use this goal as our simple benchmark for judging the gas supply agreement. Under the agreement, which is through Cheniere’s Corpus Christi subsidiary, Cheniere will buy 0.85mm tonnes of LNG per annum equivalent of natural gas, about 9% of the total 9.5mm tonnes per annum planned capacity at the Corpus facility.

Apache is an exploration and production (E&P) company, with assets in the US, the North Sea, Egypt, and Suriname. Like so many public E&Ps these days, Apache is promising to improve cash flow, pay down debt, and is focusing on its best assets, highlighting its Permian basin position. According to its public material, Apache produced 618,238 Mcf/d of natural gas from its Permian assets, 116,272 Mcf/d from its Midcontinent/Gulf Coast onshore assets, and 9,797 Mcf/d from its Gulf of Mexico offshore assets, for a total of 744,307 Mcf/d of natural gas from its US assets. The agreement with Cheniere commits Apache to approximately 140,000 Mcf/day of natural gas deliveries. Its natural gas hedges are relevant to our simplified analysis of the Cheniere/Apache supply agreement because they give us a little insight into Apache’s appetite for exposure to basis risk. As of April 30, Apache had 100,000 mmBtu/d of its gas hedged with collars at a weighted average price of $3.00 put/$3.92 call, covering the months April-June 2019. Additionally, it hedged its basis at El Paso Permian and Waha hubs, a total of 120,000 mmBtu/d and 220,000 mmBtu/day respectively, at a weighted average discount to the Henry Hub of about $0.89. Apache hedges more of its basis risk than its Henry Hub price risk. This might mean it is sensitive to the net price of natural gas, especially in West Texas.

For Cheniere, the agreement is a simple risk pass through. By linking its gas purchase to the same index against which it prices its gas sales, it passes the risk of floating price to Apache. In a sense, Apache is playing the role of the market maker in this agreement:

From Cheniere’s perspective, this mitigates risk by eliminating its exposure to both the Henry Hub price in the US and the international gas price of LNG. It had previously attempted to accomplish this goal by using the Henry Hub as its pricing benchmark in LNG sales, e.g. – selling LNG at a price equivalent to 115% Henry Hub. The agreement with Apache accomplishes the same goal by passing the spread risk to Apache, instead of the LNG buyer.

Why would Apache want this risk? Natural gas in the US, in the Permian in particular, has been a source of pain for E&Ps. With constraints to takeaway resulting in deep discounts the Hub, West Texas natural gas has traded at such a steep discount that its net-price has been negative at times. Yes, negative. At times natural gas production has represented a cost of production for some producers. If we consider Apache’s desire to generate cash flow from its core US assets, this is a substantial risk to keep in mind as we judge the supply agreement with Cheniere. By linking its sales to an international index, Apache is searching out value through a basis hedge, which we already know the company is keen to pursue based on its existing natural gas hedges. Compare the historical standard LNG price, 12% of Brent, to the Waha price over the last three years. 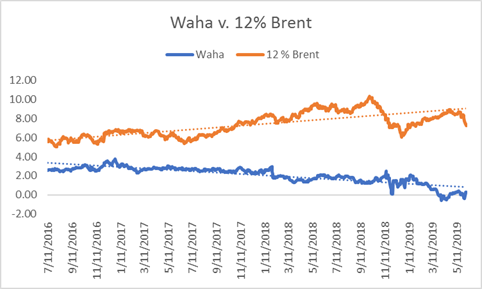 As Waha’s value has deteriorated due to its localized oversupply, Brent has been comparatively stable, despite recent weakness. Apache won’t capture this entire spread, but as a hedge, the diversification is effective.

Furthermore, the supply deal with gas indexed to Cheniere’s LNG sales is commercially equivalent to an entry into LNG for Apache, who has previously attempted to enter LNG through more traditional routes without success. It had previously been involved in international LNG projects in Canada and Australia, exiting several years ago because of rising costs and a desire to focus capital on assets in the US. The deal is a nice compromise between being an LNG asset developer and a pure independent E&P company.

So how does the gas supply agreement stack up as a risk management tool for Cheniere and Apache? From what we can see in the public domain, it looks like a win-win. Cheniere gets a reliable source of supply and passes price risk to Apache. Apache gets access to the international natural gas market, with the benefit of a basis hedge and potentially higher net-value of natural gas. Risk management is about the goal. Often a simple financial hedge is the easiest means of accomplishing that goal, but Cheniere and Apache have shown us that there are many ways of getting to the same end.