Over the past year, refining profit margins have been quite volatile. As an example, Brent crude oil/gasoil calendar swap crack spreads have traded as high as $20.56/BBL and as low as $12.12/BBL, averaging $16.17/BBL.  Crack spreads on other crude oils (Dubai, WTI, Light Louisiana Sweet, etc.) and various refined products (diesel, gasoline, jet fuel, etc.) have been similarly volatile.

While our posts often focus on hedging from the consumer and producer perspective, refiners arguably face an even greater need to hedge their exposures as their profit margins are based on the price of not one commodity, but several: the price of their input (crude oil) as well as their outputs (gasoil, gasoline, diesel fuel, gasoil, jet fuel, fuel oil, etc).  As an example, in the past four months alone, the Brent crude oil/gasoil calendar swap crack spread has declined from a high of $17.65/BBL to a current level of $12.12/BBL. 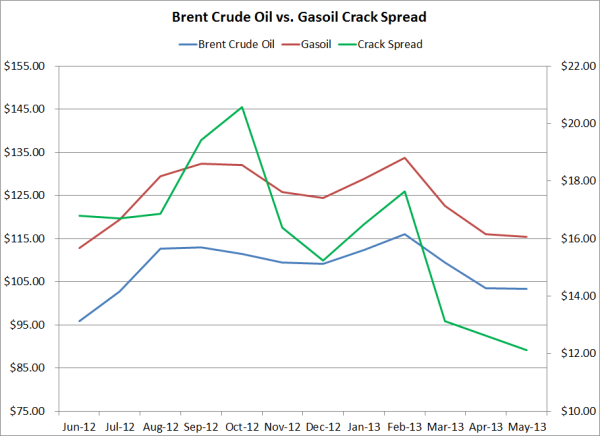 For those of you who aren't well versed in refining economics, calculating a refiner's profit margin is actually quite simple. As an example, to calculate the Brent crude oil/gasoil crack spread, you take the current price of gasoil futures, $869.25/MT, and divide it by 7.45 (there are approximately 7.45 barrels in a metric ton of gasoil) which equates to $116.68/BBL. You then subtract the current price of Brent crude oil, which is $103.95/BBL, from the gasoil price, which produces a refining profit margin (crack spread) of $11.73/BBL.

Back to the question at hand, let's assume that the refiner is interested in hedging their July 2013 gasoil oil profit margin as they need a gasoil crack spread of at least $12/BBL to meet budget. As of the close of business yesterday, the July 2013 Brent crude oil/gasoil crack spread was trading at $13/BBL based on a gasoil calendar swap at $869.72/MT ($116.75/BBL) and Brent crude oil calendar swap at $103.74/BBL.

To hedge or lock in the July Brent/gasoil crack spread of $13/BBL, the refiner could buy a July Brent crude oil swap at $103.74/BBL and sell a gasoil swap at $869.72/MT ($116.74/BBL). However, the refiner wants to retain the ability to participate in a favorable price move so rather than hedging with swaps, it has decided to hedge with an option.

What if July Brent crude oil increases a modest amount, averaging $110/BBL, while gasoil jumps to an average $925/MT ($124.16/BBL), which equates to a crack spread of $14.16/BBL? In this case, the refiner will not experience a gain on the put option as the crack spread settled above the strike price of $12/BBL.  However, because the refiner hedged with the put option, rather than the swap which would have locked in the $13.00 crack spread, it was able to participate in the favorable price move by capturing an additional $1.16/BBL ($14.16-$13.00).