As we've recently received inquires from several airlines who are looking to begin hedging their jet fuel price risk for the first time, we thought it would be beneficial to address the basic jet fuel hedging strategies available to airlines.

As this post will be the first of several in a series, we'll start with jet fuel swaps as buying jet fuel swaps is often considered the "most basic" hedging strategy for airlines.  In subsequent posts we'll address how airlines can hedge their fuel risk with call options, basis swaps, collars and spreads on options.

A jet fuel swap is an agreement whereby a floating (or market) price is exchanged for a fixed price, over a specified period(s) of time.  In addition to jet fuel, swaps are also used to hedge numerous other commodity risks incluing bunker fuel, crude oil, diesel fuel, electricity, natural gas, etc.  The term "swap" is used to describe the trade as the buyers and sellers of a swap are “swapping” cash flows.

As an example of how an airline can utilize a jet fuel swap, let's assume that you're an airline who consumes a large amount of jet fuel in Asia and you have decided to lock in 50% of your fuel costs for a specific month as you have already sold 50% of your available seats during said month.  For sake of simplicity, let's assume that you are looking to hedge 10,000 BBLs of fuel which will be consumed during the month of June.   In order to do accomplish this you could purchase a June 2012 Singapore jet fuel swap, on 10,000 BBLs, from your counter-party (often a major oil company or bank).  If you had purchased this swap today at the prevailing market price, the price would have been (approximately) $133.35/BBL.

Now let's look at how the swap would perform if the average price of jet fuel during the month of June averages both $10 per barrel lower and higher than the price of your swap, $133.35/BBL.

In the second scenario, let's assume that jet fuel fuel prices in Asia increase and that the average price for Singapore jet fuel, for each business day in June, is $143.35/BBL.  In this scenario, your hedge would result in a “gain” of $10/BBL or $100,000. As a result, your counter-party would owe you $100,000, which would offset the increase in your actual June fuel costs by $10/BBL. 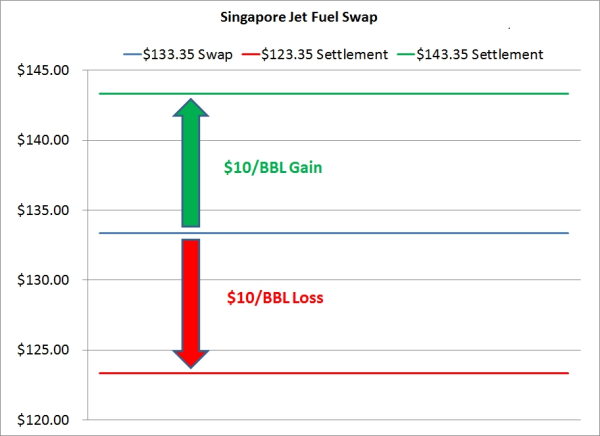 As this example shows, purchasing a jet fuel swap allows an airline to hedge their exposure to volatile jet fuel prices and lock in their profit margins.  If the price of jet fuel increases, the gain on the jet fuel swap offsets the increase in the airline's actual jet fuel cost “into the plane".  On the other hand, if the price of jet fuel decreases, the loss on the jet fuel swap offsets the decrease in the airline's actual fuel cost “into the plane”.  Either way, once the swap is executed, the airline has turned an unknown fuel cost into a known fuel cost, excluding basis risk.  While this example addresses how an airline can use jet fuel swaps to hedge their exposure to jet fuel prices, the same methodology can also be used to hedge exposure to other fuels (bunker fuel, diesel fuel, etc.) and commodities as well.

If you would like to discuss how we can assist you with jet fuel hedging, please feel free to contact us.